In its typical cylindrical shape, the manna is obtained from the natural lymph of the ash tree. The tree trunk is cut and the lymph drips along a nylon thread connected to a steel lamina put under the incision. By pouring out, the lymph forms a long stalactite, which is cut into pieces after a couple of days. The manna so obtained is called "cannoli" and is considered manna in its purest form, because it's pretty much impurity-free.

Manna can be used as a natural sweetener: its main component is D-Mannitolo, a hexavalent colourless alcohol, odourless and sugary to the tongue, also known as "Manna Sugar", a substance included in the category of alcohol-sugars that can be consumed even by diabetic people.

If you wish to know the other beneficial effects of manna, you can check our article Manna and well-being: 5 ways of using it to benefit your body, inside and out.

The Consorzio Manna Madonita aims at spreading and preserving the heritage connected to manna and the territories where it is produced. Its team is made by young professionals and constantly works in order to let the general public know about manna and its benefits, as well as the characteristics of the territory.

Manna is part of our exclusive collection Castelbuono Caput Mundi which collects talent and creativity, embodied in products that say something about our little town. Only on Putia.eu! 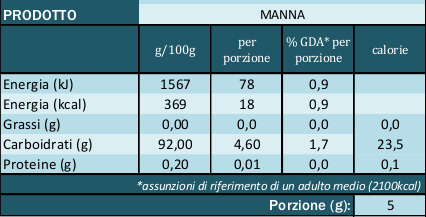 Based on 1 review Write a review

Shipping takes place within 48/72 hours from the moment the order was submitted (this does not include festivities). If you wish to know more, you can check our General Conditions of Sale or our section dedicated to Shipping Modalities and Costs.

Subscribe to our Newsletter and save 10% on your next purchase! Don't miss artists monographs, exclusive PUTIA news, promotions and much more.

Your Information will never be shared with any third party.